Amid rising costs, how do subways fare?

The local transit agency in Atlanta (MARTA) recently voted to raise fares from $1.75 to $2.00 starting in 2010. That is likely to cause howls since the economy is already hitting riders hard. But how does the new fare compare with other systems around the country? And how well in general does the Atlanta subway, well, fare? 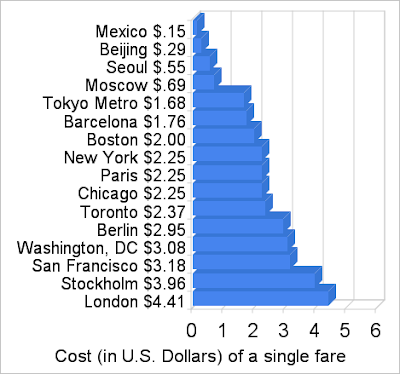 To start, Atlanta is one of only eleven cities in the United States that has heavy rail service, which is admirable. Of course the trend in the last decade has been toward light rail. As for the number of stations and lines, it does not even compare to San Francisco's BART and DC's Metro - two systems that were established in the 1970's similar to MARTA.

As for the comparison to the fares of other subway systems in the "developed" world, Atlanta falls near the middle of the pack, which is good news for Atlanta riders.
Here are a couple of interesting websites about subway systems from around the world.

First is a ranking of the "top 11 underground transit systems from around the world," and the second is a devoted to the fact that "subway systems need not be boring or dreary."