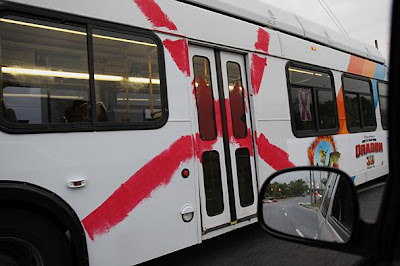 It is hard not to be cynical when writing about transportation/transit funding in Georgia, but I will do myÂ darnedestÂ not to interject cynicism into this update. Recently, there has been a glimmer of hope in the long fought battle to get the State to step up with some leadership and money. Just last night, at the eleventh hour, the Georgia State Legislature voted and approved a measure that would allow 12 designated regions around the state to tax themselves for transportation improvements.
As reported in the AJC:

The bill would divide the state into 12 regions. A â€œroundtableâ€ of local elected officials in each region, working with an appointee of the governor, would draw up a list of projects for the region. The region could then submit the list to its voters for their approval in a referendum, along with a 1 percent sales tax to fund them. No county could opt out of a regionâ€™s tax, but a roundtable could decline to hold a referendum in the region.

If approved by a region, the money would not start funding for approximately three years. So what is a region to do if they need money sooner? Well, I'm not sure if there is a solution across the board, but MARTA was offered some relief when the legislature included language in the proposal that "lifts, for three years, a restriction on how the transit agency can use its revenues from sales taxes, freeing up several million dollars for operations."
Thank goodness for small miracles. So to recap, the legislature has spent years working to pass a piece of legislation that 1) allows us to tax ourselves for transportation projects and 2) allows us more flexibility to spend money we collected by taxing ourselves. Nice.