Savannah Streetcar makes headlines, so why not Atlanta? 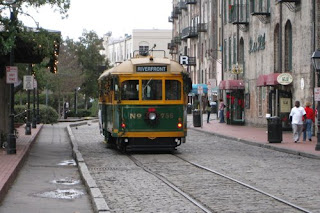 As you may remember in 2004, Lanier Parking Solutions launched an effort to return electric streetcars to Atlanta's Peachtree Street. Lanier led an effort to raise hundreds of thousands of dollars to perform a feasibility study, which found a Peachtree streetcar would reduce traffic congestion and spur high quality development in the corridor. In 2006, Lanier handed off the project to the Atlanta mayor's Peachtree Corridor Task Force (later the Peachtree Corridor Partnership), which made the streetcar the centerpiece of an overall transformation of Peachtree. Now we just need the funding.

While we were waiting, Savannah, Georgia found out first hand just what that study predicted.

A story published by the Georgia Online News Service reports Savannah is running a restored 1925 streetcar along its riverfront, linking tourists with hotels, attractions, and connections to downtown. They're already talking about expanding to new routes.

â€œAreas along streetcar routes thrive,â€ said Jay Self, director of
Savannahâ€™s tourism and film services department. â€œI donâ€™t know anyone who thinks
the streetcar is a bad idea now that theyâ€™ve seen it run.â€

The story quotes me, too. Check it out here.

Charlotte, Tampa, New Orleans, Houston and Dallas all have streetcars, and Miami passed a straw poll to fund one as well. Our hopes were high that Atlanta would be the first city in Georgia to have a streetcar. I hope we're not the last to get on board.