What to Do About a Lack of Crosswalks: Prosecute Pedestrians? 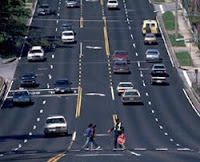 The issue of providing safe crossing for pedestrians has been front and center ever since the national media took notice of the Raquel Nelson story in Atlanta. Ms. Nelson was convicted of vehicular homicide because her four-year-old son was hit and killed as the family crossed a four-lane road. There were no crosswalks nearby.

From Atlanta to Mumbai, the transportation infrastructure has deemed cars a far higher priority than pedestrians. The result is soaring pedestrian death rates.

The Times of India reports "nearly 78% of road fatalities are pedestrians," a result of the country's focus on widening roads to accommodate the surge in cars.

Policies in most American cities aren't that different, with transportation and transit planners' single purpose being to move as many cars through an area as fast as possible. The solution isn't how to eliminate the cars but how to slow them down to accommodate other modes.

Ben Welle, assistant project manager of Health and Road Safety at EMBARQ, says â€œThe thing to remember is that the one thing that is always involved in a car crash is a car, so slowing them down through good design and shifting trips through high quality mass transit, walking and biking facilities can really reduce risk.â€

To read more about Raquel Nelson's story and the issues they have raised check out the following links:
Pedestrian Infrastructure Essential to Safer Roads Worldwide - The CityFIX

Prosecuting the Victim, Absolving the Perpetrators